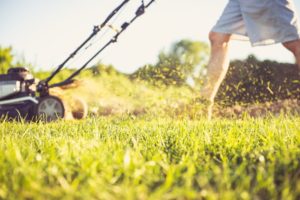 When you’re doing research for what grass seeds to buy or what turf would be best to suit your requirements, it helps to have all the facts. That’s why we at Glenview Turf want to help you decided between two very good turfs. While Sir Walter and Empire Zoysia are both incredible choices, we believe that you should choose Zoysia over Sir Walter – here’s why..

Sir Walter is a terrific grass that recovers well from injury and is incredibly hard wearing. No sprinting children or digging puppies will ruin it. However, at the end of the day, we all want a lawn that is low maintenance so we have one less thing to worry about. And they don’t call Zoysia “EZ Grass” for nothing.

In the summer, Sir Walter needs to be mown every four to five days because it grows so quickly. However, Empire Zoysia only requires mowing every ten to fourteen days. During the winter months, Zoysia also only requires about half the mowing that Sir Walter requires. In addition, Zoysia requires less watering and less fertilizer than Sir Walter. So enjoy your lawn. Don’t work for it.

Who can resist Empire Zoysia’s eye-catching dark green colour? You’ll immediately want to take off your shoes and stick your feet in the beautiful green, soft to the touch and not at all intrusive due to its fine leaf texture.

If you’re the type that enjoys the look and effect of a fine leaf, but needs a turf that can handle a bit more shade than a Couch, this turf is a happy medium between Walter and Couch. Zoysia thrives in the full sun, but it can handle four to five hours of shade. Originally an Asian turf from a climate that mimics South East Queensland’s subtropical weather, Empire Zoysia is probably one of the most easily maintained lawns on the market.

Empire Zoysia is not entirely immune to Lawn Grubs, the larvae of Japanese beetles that feed on the roots of grass. However, it has an incredible natural resistance to Lawn Grub attacks, so it is less susceptible to damage while it is establishing itself as turf in your lawn – and once it is established, it is one of the most drought tolerant turfs due to its deep root and underground runner system. Perfect for that Sunshine Coast sun and Australian drought.

Empire Zoysia also has a good resistance to insects and other diseases. It is high wearing and durable when it comes to children and animals as it recovers quite well from injury. It is even excellent at out-competing weeds.

Zoysia does best in full sun but can tolerate up to five hours of shade. She grows well in clay and sandy soil areas. She’s got a high salt tolerance, so she loves living on the coast. Empire can thrive in both extreme heat and cold, frosty conditions. This turf is ideal for:

For more information about any of our turfs, please give Glenview Turf a call.